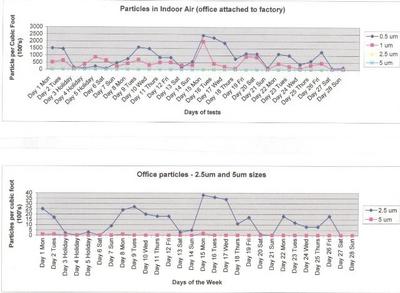 Particle removal effectiveness is a function of filter efficiency and the air exchanges per hour but also of outdoor to indoor particle transfer, particle size and indoor activity.

Particle counts in an indoor environment office are a function of filter effectiveness and air flow through the air cleaning device but these figures show that activity in the indoor space, outdoor to indoor particle transfers and particle deposition are just as, if not more, important. The most obvious confirmation of this fact are the particle counts for the Holidays and the weekends. Very low particle counts in all size ranges were recorded on Holidays, Saturdays and Sundays. This was true for all filter efficiencies. The HVAC system was left on during Holidays and weekends. However, the lack of activity in the building allowed the baseline of particles to start lower and not be supplemented during the day. The air cleaner had sufficient capacity to keep particle counts low.

The day by day particle counts for 0.5 um, 1 um and 2.5 um correlate with each other relatively closely. On days when the particle count was up or down in one size range there was a similar pattern in each of the other sizes. However, the particle counts for 5 um were almost always close to zero – regardless of the filter efficiency in the air cleaning device. Because of larger mass of the 5 um particles they do not stay in the air for very long (less than 20 minutes). So even though events might happen during the day that create particles in the 5 um range, these higher readings are not sustained long enough to alter the daily average particle counts.

Surprisingly, there was very little difference in particle counts when using a medium efficiency filter (MERV 7) versus a high efficiency filter (MERV 13). It appears that the factors creating particles in the indoor enviornment including outdoor to indoor particle transfer and activity in the space outweigh the difference in filter efficiency. This raises questions regarding the trend to recommend higher efficiency filtration in offices and other buildings. (For example, the U. S. Green Building Council requires MERV 13 filters to receive points in their LEED certification program.) It also emphasizes the importance of further study in this area.

(Note: The MERV 7 filters used in this study were made with electret media and had an average efficiency on sub-micron size particles of 16.7% and efficiency on particles 1.0 micron to 3.0 microns of 44.7%).