There has been a great deal of discussion about the accuracy of filter testing.  This discussion has covered everything from materials (test dust) to methods to reproducibility and much more.  But the problem with these discussions is that they do not deal with the effectiveness of filters in indoor environments.  After all, particles in an indoor environment do not “line up” to pass through the filter as they do in a test duct.  Particles in an indoor environment act much more randomly.  They do not move in straight lines and things like gravity, air flow, heat, movement of people in the space, proximity to return air ducts, etc. have a bearing on the extent that air filtration will have an effect on indoor particle counts.  In addition, new particles are constantly being created by activity in a space and by outdoor to indoor particle transfer.

These points have been discussed (with supporting data) in several articles on this site: “Are Air Filter Tests Representative of Indoor Particle Counts?” and “The Effect of Particle Removal Effectiveness on Particle Levels in an Office Environment“. The purpose of this article is to present and review the results of tests run to determine what happens when an aqueous aerosol (like a sneeze) is introduced into a room environment.  What effect does air filtration have in removing particles of various sizes from the air?  Do different types of filters (with the same MERV) produce different results?  Our objective is to provide more information on how particles are captured by filters in an indoor environment.

The test room is 120 square feet with 8 foot ceilings for a total volume of 960 cubic feet.  The filtration device moves air at the rate of 300 cubic feet per minute.  Thus the device provides 20 air changes per hour (ACH) in the room.  This gave us 5 air changes for each 15 minute test.

The particle counters were located 30 inches off the floor and 36 inches from  the wall.  They measure particles greater than 0.5µm (micrometers or microns), 1µm, 2.5µm and 5µm.  The filtration device was located 24 inches off the floor and 36 inches from the wall.  An atomizer was used to release aqueous particles into the room for each test.  The aqueous solution consists of 99+% deionized water, less than 1% plant based surfactant and less than 1% plant based tree oil.  The same amount of particles was released for each test. Each “charging” of the room with aqueous particles was done 6 feet from the particle counters and 6 feet from the filtration device.  The filtration device and the particle counters were also 6 feet from each other in adjoining sides of the room.  The doors of the room were closed.   The forced air conditioning and heating system was off.  Each test ran for a total of 15 minutes.  Humidity in the room was 40-45%.  The filtration device was running with the filter being tested when the room was “charged” with the aqueous solution.  Filters used in the tests were a MERV 8 electret media pleated filter, a MERV 8 tackified polyester pad (made into a filter), a MERV 8 Ring Panel,  a MERV 8 mechanical media pleated filter and a MERV 13 Mini-pleat filter. 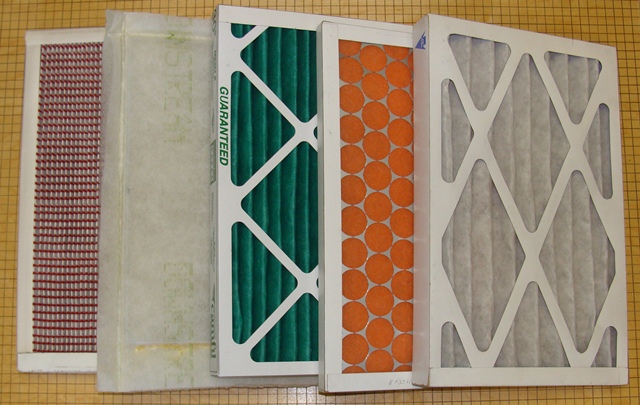 All tests were run at least twice with each filter.  The test results were averaged for the number of tests run.  To determine the natural settling baseline of the aqueous particles, tests were run with no filter in the filtration device.  Between each test particles were removed from the room so that the next test would start at approximately the same ambient particle levels.   A complete cycle of tests was run for all filters before starting the subsequent filter tests.

At 0.5µm we found that the MERV 8 Tackified Polyester pad and the MERV 8 Ring Panel had very little efficiency.  In fact, results at this particle size were close to the “no filter” line.  Both of these filters have relatively large fibers and larger distances between fibers.  The majority of the smallest particles in our tests simply pass through the filter without difficulty.  This is not a surprise and is consistent with what we would expect given the performance of these filters in the ASHRAE 52.2 tests.  This is discussed in more detail in another article on this site: “All MERV 8 Air Filters are not Created Equal – Performance Varies Greatly by Particle Size“. 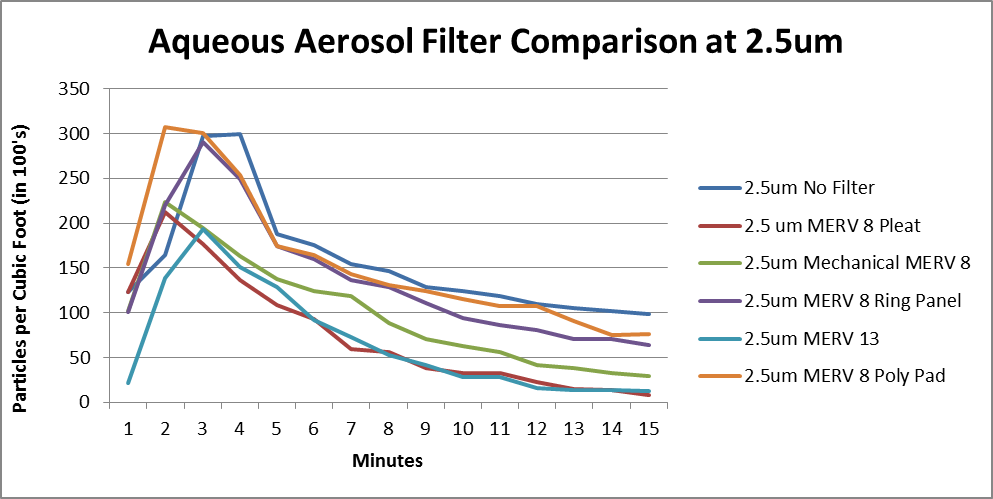 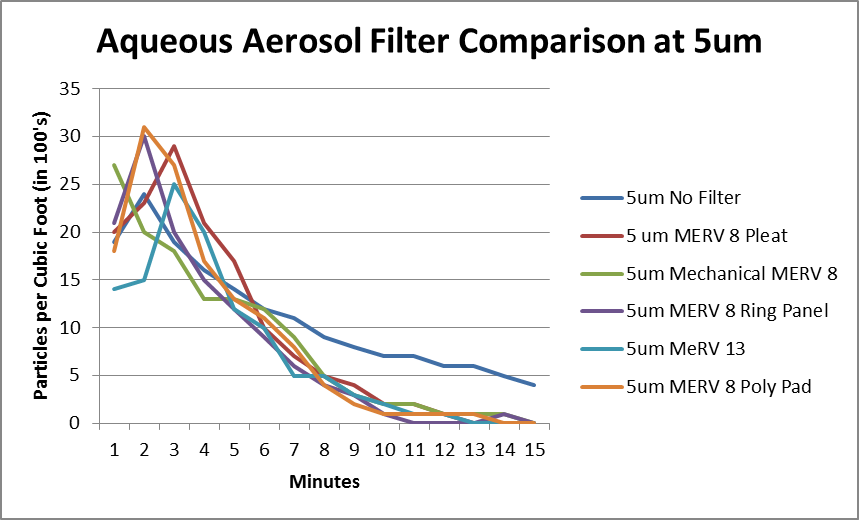 At 5µm all filters had similar results and performed with approximately equal efficiency.  All beat the control of “no filter.”

The first obvious conclusion from these tests is that no matter what size particle or what level of filtration in the room, if someone is within 6 feet of an event creating an aqueous aerosol, they are going to receive some exposure.   The exposure will decrease over time – with or without filtration.  With filtration as the air circulates and has the opportunity to pass through the filter, exposure can be decreased dramatically.

What this points out is that events drive particle counts.  We can modify the levels of the particle counts through filtration, but we cannot eliminate their effects.  There are environments where no matter what the level of filtration or the number of air changes per hour, one will not materially change the particle count.  For example, a few weeks ago I was having a discussion about this issue in a crowded restaurant (nice dinnertime discussion).  There were two hundred or more people in the restaurant, at least 50 conversations going on, cooking in a huge “open” kitchen visible from the restaurant, waiters and bus staff moving from table to table, the outside door opening every one to two minutes, and it goes on with more particle generation events happening every few seconds.  The activity in the restaurant overwhelms the ability of the air distribution and air filtration system to make much of a difference.  It is like taking a pea shooter to an artillery battle.

Visualize it this way.  In our tests the “event” was the introduction of the aqueous aerosol in the room.  This created a “peak” particle count for all particle sizes.  This peak was reduced and eventually eliminated by a combination of deposition and filtration, but it took a number of minutes to do so.  In an active environment, the peak producing events are happening every few seconds.  It is much more likely that the particle producing events will add to each other and “overwhelm” the particle removal mechanisms than they will stay ahead of the particle generation and reduce particle counts to any great degree.  On the other hand, in indoor environments where one has a relatively low level of activity and the air distribution and filtration can stay ahead of the particle generation, then the efficiency of a filter can have a significant effect on particle counts and particle exposure.

Given the “spikes” created by particle generation activities, it is hard to imagine an indoor environment occupied by people achieving the state of being “a well mixed indoor environment.”  Everything from breathing to movement creates particles.  Each of these activities will create a “peak” like our tests.  The highest exposure to the particles created by the activity will be in the immediate vicinity.  As the distance decreases from the event, exposure decreases because of particle deposition and distribution of the particles into a larger volume of space.  This is discussed further in the article on this site entitled “What Happens to the Particles When You Sneeze?“.  As a result, about the only truly “well mixed” indoor environment is one that is unoccupied.

It is not surprising that the MERV 8 poly pad and the MERV 8 ring panel had very low fine particle removal efficiencies.  The ASHRAE 52.2 tests on these types of filters show that they have less than a 5% efficiency on particles 0.3µm-1µm in size.  What was surprising was the MERV 8 mechanical media filter had such a low efficiency on fine particles in comparison to the MERV 8 electret media filter.  It looks like the combination of mechanical and electrostatic properties in the electret media has a benefit – even in “medium efficiency” pleated filters.

Also, it is interesting to note that particle counts at 1µm, 2.5µm and 5µm were similar for both the MERV 13 mini-pleat and the MERV 8 electret media filter.  Apparently, the reasonable efficiency on these size particles of the MERV 8 electret media and the particle dynamics in the room negate the effects of the higher efficiency of the MERV 13 filters.  With the 20 ACH in this environment it would mean 5 passes through the filter in the 15 minutes of the test.  With each pass through the MERV 8 electret media filter we would expect a 50% removal rate for 1µm sized particles and a 70% removal rate for 2.5µm sized particles.  As a result, it would not take long to be at relatively low particle numbers so that the difference between the two filters would not be discernible.

All of the above data is based on clean filters.  What happens when the filters get dirty and the electrostatic charges are reduced by contaminants on the filter?  This question resulted in the optional Appendix J to the ASHRAE 52.2 test protocol.  In this additional test, the filters are totally neutralized of all charge by being exposed to nano-particles.  Then the complete 52.2 test is run on the filters with no charge.  The result of this test is the MERV-A.

But is this a fair representation of what actually happens to a dirty electret media filter?  Manufacturers of electret media argue that it is not.  They argue that the charge is retained in the filter media for a long time.  They also point out that their electret media is a combination of mechanical and electrostatic so that even if the charge starts to decrease the filter is becoming more efficient as it gets dirty and continues to perform at a high level. 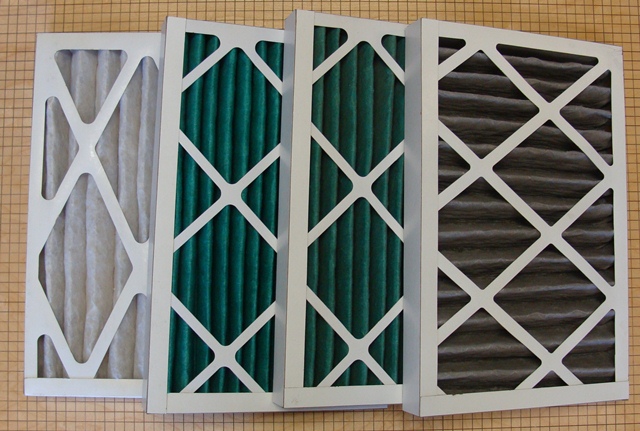 The results were the following: 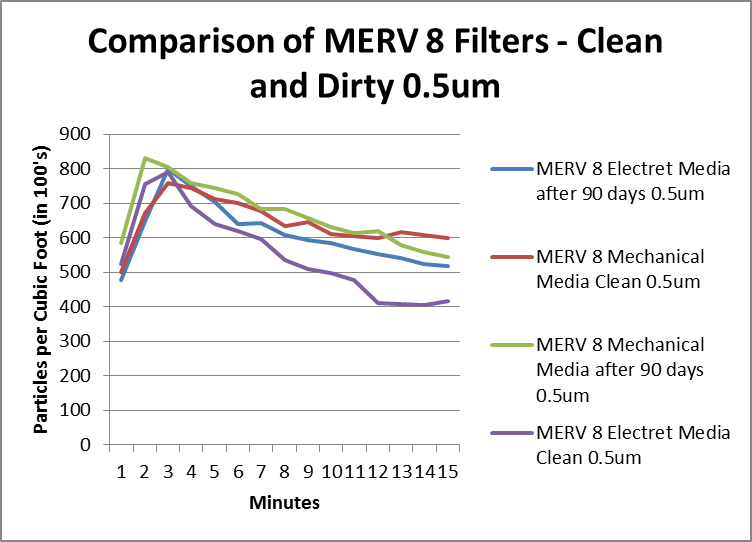 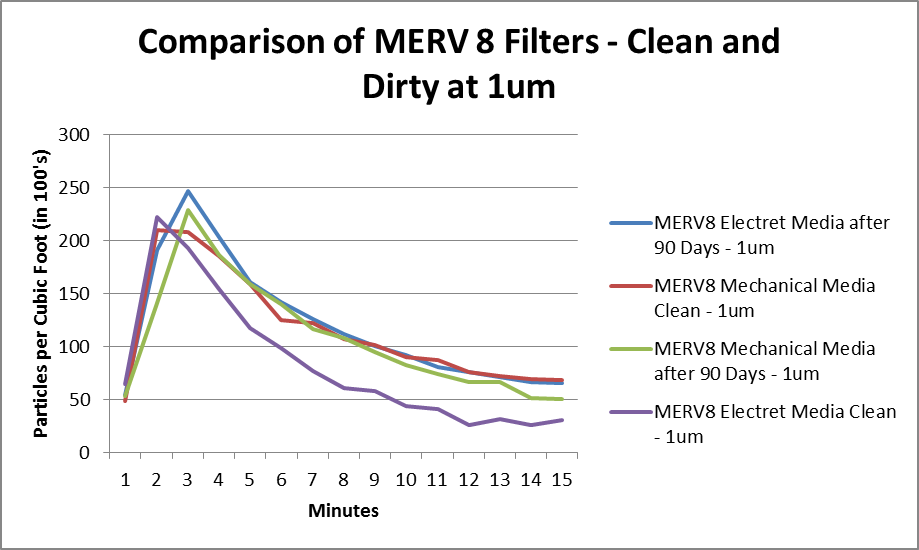 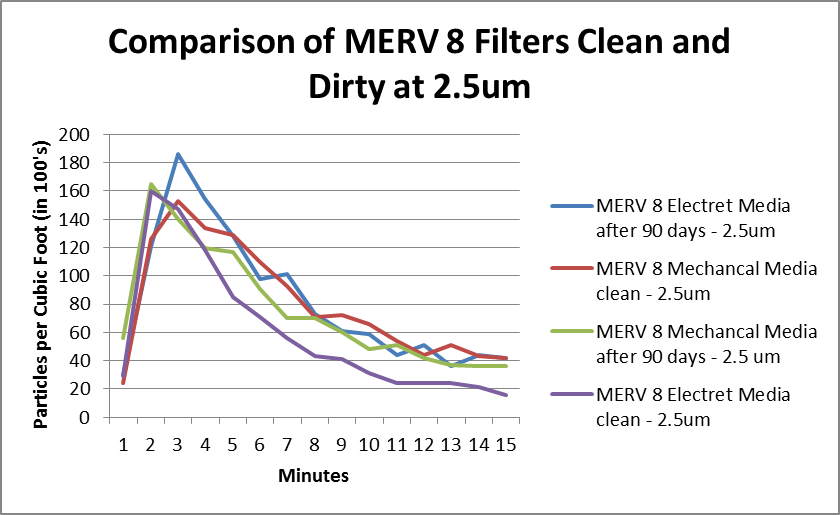 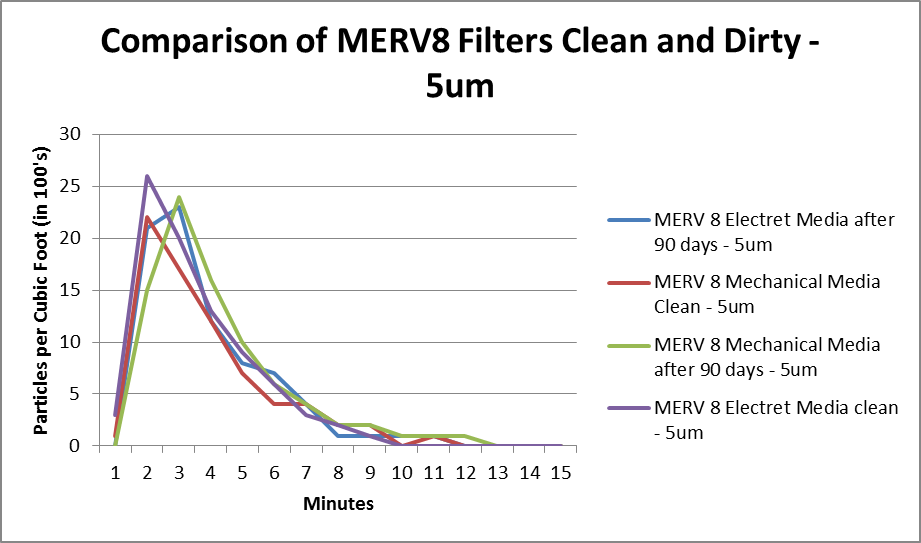 The fear has been that the efficiency loss in an electret media pleated filter over time would be so substantial that it would not provide the same effectiveness over its useful life.  (the MERV 8 becomes a MERV 4 scenario)  In some higher efficiency filters this might be a concern.  But this is not the case for pleated filters.  The combination of mechanical mechanisms and the long lasting electrostatic charge appear to provide enhanced performance throughout the life of the filters.